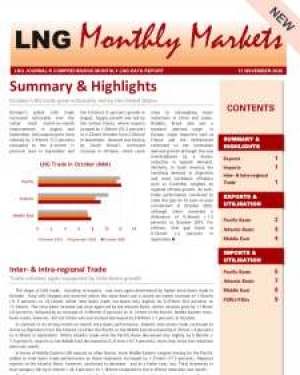 Signs of Higher US LNG Exports to China

Presumably induced by strong market incentives – including a healthy price spread in favour of importers and an infrastructure access reform – Chinese gas importer Foran Energy Group and US LNG player Cheniere have signed an agreement for 26 cargoes to be delivered over four years starting in 2021. Originally to a healthy start in 2018, US LNG exports to China have been hampered by a protracted trade dispute between the two countries. China has since waived tariffs on US LNG, reopening the door to US cargoes as its gas demand continues to grow. However, US foreign policy is likely to remain ‘tough on China’.

Though all major liquefaction projects have been deferred to 2021 and beyond, Sempra Energy is pressing ahead with its Costa Azul project at Mexico’s Pacific Coast. The US developer said it is “optimistic” to receive a government export authorisation and take FID “this year”. Rival developers have delayed projects due to the pandemic and implemented radical cost-cutting measures of nearly $55 billion combined. – Markets Editor Anja Karl investigates.

Hard-nosed buyers are bargaining for cheap term LNG supplies as about one-third of active contracts are due to expire between 2020 and 2025. Contracting activity collapsed this year with only 35 bcm signed to date, which gives buyers plenty of bargaining power to negotiate flexible pricing and delivery terms, our Markets Editor Anja Karl finds.

September LNG trade continued on the marginal improvement trajectory of August on the back of higher Middle Eastern and Atlantic exports to cover additional demand in Asia and in some European countries, our Markets Editor Alexander Wilk reports.

AGL ENERGY of Australia has pledged at the annual meeting to pursue the Crib Point LNG project on Westernport Bay, south of Melbourne in the state of Victoria as one of the vital tools in the cleaner energy transition.

Facing up to the methane slip