China National Offshore Oil Corp. (CNOOC) has raised its year-to-date domestic gas production to 311.3 billion cubic feet (bcf), up from 250.6 bcf, in a first step towards making gas account for half of CNOOC’s total output by 2035. Two sizable fields, Lingshui 17-2 and Bozhong are due to come onstream.

Wison Offshore and Marine, the owner of the Chinese shipyard at Nantong in Jiangsu province, has started to modernize the yard’s LNG shipbuilding capability. The upgrade will expand the yard’s size and transform its management and control processes. The project will cost 1.43 billion Chinese yuan ($200m) and is scheduled to be completed in 2022.

2.77mmt on the water with a delivery horizon of 1st December, with c. 44 percent due in the North China region. At the time of writing, there were also cargoes amounting to 0.49mmt with unconfirmed destinations in China.

China’s LNG offtake declined by 0.49mmt month-on-month in October, decreasing significantly by 8.7 percent to 5.07mmt. Monthly Chinese offtakes had grown by 0.41mmt (7.7 percent) in August, whereas month-on-month demand began to decrease in September, when offtakes totalled only 5.55mmt (-0.17mmt, -3 percent). This means Chinese LNG demand in October was 0.65mmt (-11.4 percent) lower than in August. 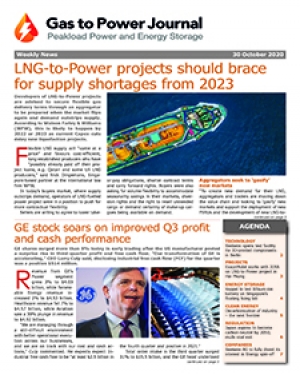 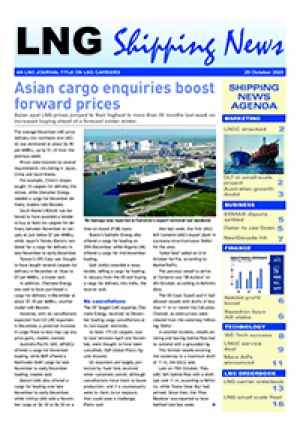 Asian spot LNG prices jumped to their highest in more than 20 months last week on increased buying ahead of a forecast colder winter.

The average December LNG price delivery into northeast Asia LNG-AS was estimated at about $6.90 per MMBtu, up by $1.10 from the previous week.

Prices were boosted by several requirements circulating in Japan, China and South Korea.

South Korea’s KOGAS was believed to have awarded a tender to buy at least six cargoes for delivery between November to January at just below $7 per MMBtu, while Japan’s Tohoku Electric tendered for a cargo for delivery in late November to early December.

Taiwan’s CPC Corp was thought to have bought several cargoes for delivery in December at close to $7 per MMBtu, a trader said.

In addition, Cheniere Energy was said to have purchased a cargo for delivery in December at about $7.10 per MMBtu, another trader told Reuters.

However, with no cancellations expected from US LNG exporters in December, a potential increase in cargo flows to Asia may cap any price gains, traders warned.

Darwin LNG also offered a cargo for loading over late November to early December, while Ichthys LNG sold a November cargo at $6.10 to $6.30 on a free-on-board (FOB) basis.

At least 175 US cargoes, due to load between April and November, were thought to have been cancelled, S&P Global Platts figures showed.

US exporters are largely protected by fixed fees received when customers cancel, although cancellations force them to lower production, and if a counterparty were to claim force majeure, that could pose a challenge, Platts said.

‘Golar Seal’ sailed on 21st October for Fos, according to MarineTraffic.

The previous vessel to arrive at Cameron was ‘SK Audace’ on 4th October, according to Refinitiv data.

The US Coast Guard said it had allowed vessels with drafts of less than 11 m to transit the Calcasieu Channel, as obstructions were cleared from the waterway following ‘Delta’.

In another incident, vessels entering and leaving Sabine Pass had to contend with a grounded rig.

This limited vessels entering the waterway to a maximum draft of 11 m, the USCG said.

Late on 19th October, ‘Palu LNG’ left Sabine Pass with a draft just over 11 m, according to Refinitiv, while ‘Stena Clear Sky’ had arrived. Since then, the ‘Flex Resolute’ was reported to have berthed late last week.

LNGC attacked in Gulf of Guinea

The 2003-built LNGC ‘Methane Princess’ was reportedly boarded by pirates on 17th October.