The Equinor-controlled LNG carrier Arctic Voyager depart the Snohvit LNG project with the plant’s first exports since its shutdown in 2020.

The Arctic Voyager was en route fully laden to the Baltic region, our data showed at the time of writing, which suggests to us delivery to either Swinoujscie LNG in Poland or the Klaipeda FSRU terminal in Lithuania.

Both Poland and Lithuania have boosted LNG imports since Russia’s invasion of Ukraine. We are currently anticipating another cargo to leave Snohvit LNG towards the end of the week.

The vessel was en route to the Baltic Sea at the time of writing, which suggests a delivery to either Swinoujscie LNG in Poland or the Klaipeda FSRU terminal in Lithuania. According to our data and calculations, the LNGC is travelling fully laden with a cargo of roughly 0.06mmt. 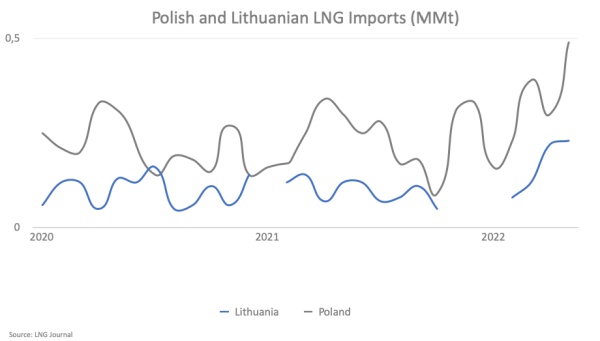 Both Poland and Lithuania have boosted LNG imports since Russia’s invasion of Ukraine.

Russia’s gas conglomerate Gazprom said in April it had halted gas exports to Poland over the country's refusal to pay for supplies in roubles. Lithuania’s Ministry of Energy said it had stopped the import of Russian energy supplies in May.

Previously, the Arctic Voyager arrived off Hammerfest alongside the Equinor-controlled vessels Arctic Lady (147,200m3) and Arctic Princess (147,200 m3) in the second half of May.

The Arctic Aurora (155,000 m3) is circling outside at the Hammerfest anchorage since 1 June, our data show. We are currently anticipating another cargo to leave Snohvit LNG towards the end of the week.

Equinor, the operator of the Snohvit LNG project, announced on 2 June that LNG production had started with first LNG in the tank ready for export.

“With the start-up of Hammerfest LNG, we add further volume to the already substantial gas deliveries from Norway.

This is of great significance in a period when predictable and reliable supplies are highly important to many countries and customers,” Irene Rummelhoff, Equinor’s executive vice president for Marketing, Midstream and Processing said in the statement.

At the end of January this year, operator Equinor had pushed the restart deadline back to mid-May.

It announced another small delay as that deadline approached due to a minor technical fault on a compressor.

Equinor’s Gisle Ledel Johannessen told AFP on 27 May that the plant’s cooldown process was underway but declined to specify a date for the first cargo loading.

The Snøhvit LNG project was shut down after a fire in September 2020.

Before the incident, the plant had seen scheduled maintenance in May and June as well as brief maintenance work on an outage and subsequent gas leak on 13 September, with the Equinor-controlled vessel Arctic Lady not completing a cargo loading on 16 September, our data show.

Snohvit LNG is owned by a joint venture comprising Equinor Energy AS, Petoro AS, TotalEnergies EP Norway AS, Neptune Energy Norway AS and Wintershall Dea Norway AS

Free Read
More to read: « No LNG Exports from Snøhvit LNG in May Cumulative LNG Demand Growth Accelerates in Europe »
back to top