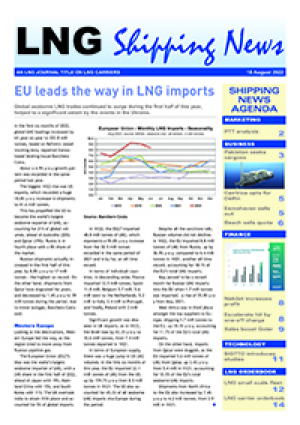 Global seaborne LNG trades continued to surge during the first half of this year, helped to a significant extent by the events in the Ukraine.

News that Thailand’s PTT has signed its first LNG sale and purchase agreement (SPA) in nearly six years also marks the first time the state-owned company has agreed to take term supply on an FOB basis.

The German Government has signed a memorandum of understanding (MoU) to supply LNG to two FSRUs.

Energy strapped Pakistan has asked for bids for 72 LNG cargoes from international suppliers over a period of six years.

Organised through Pakistan LNG Limited (PLL), a wholly owned subsidiary of Government Holdings Private Limited (GHPL), suppliers have been told to submit bids by 14th September, to ship cargoes on a Deliver Ex-Ship basis (DES) at Port Qasim, Karachi, according to the tender documents.

According to the tender documents, PLL is requesting one cargo of 140,000 cu m per month for the six year period.

Thus the company will manage the entire supply chain from procurement to end users.

However, not a single bid was received for the $1 bill LNG purchase tender, Bloomberg, said, adding that this reflected both the global fuel shortage and the reluctance of suppliers to sell to a country in the depths of an economic crisis.

In June, PLL disqualified two bids received for a tender seeking an LNG spot cargo for delivery in early July for technical reasons.

UK energy distributor, Centrica and US-based LNG developer Delfin Midstream have signed a Heads of Agreement to purchase 1 mill tonnes per annum of LNG for 15-years on a Free on Board (FOB) basis.

Gasunie subsidiary, EemsEnergyTerminal has sold the remaining capacity of its Eemshaven LNG terminal to ENGIE, who purchased the last 1 bill cu m.

Eni acquires an FLNG - looks for a second

Eni will use the FLNG in the Republic of Congo, as part of a natural gas development project in the Marine XII block.

‘Tango’ FLNG was built in 2017 and has a treatment capacity of around 3 mill standard cu m per day and an LNG production capacity of about 0.6 mill tonnes per year.

This acquisition allows for the development of a fast-track model capable of seizing the opportunities in the LNG market, Eni said.

In addition, the high flexibility and mobility characteristics of the unit will enhance the development of Eni's equity gas by accelerating production start-up time.

‘Tango’ will begin operations in the Congo in the second half of 2023, following the completion of mooring and connecting work to tie-up with the Marine XII network and infrastructure.

When fully operational, the project will provide volumes in excess of 3 mill tonnes per year.

As mentioned in LNG SN 4th August, Eni has also confirmed that it is planning to install a second FLNG offshore Mozambique.