Signs of the upcoming start-up of Mozambique’s Coral Sul FLNG project are intensifying as the BP-controlled British Mentor entered Mozambican waters on Monday and travels along the country’s coast, our data showed. BP is the sole buyer of the project’s LNG for the next 20 years. Although Eni has refrained from setting a start-up date, it has been targeting first LNG in 2H 2022 after introducing first gas to the unit in June. LNG from Mozambique would be a welcome addition to a tight market.

The BP-controlled LNG carrier British Mentor arrived in Mozambican waters on Monday and was headed for Pemba at the time of writing. The vessel’s arrival hints that the date for Mozambique’s first LNG export is fast approaching. 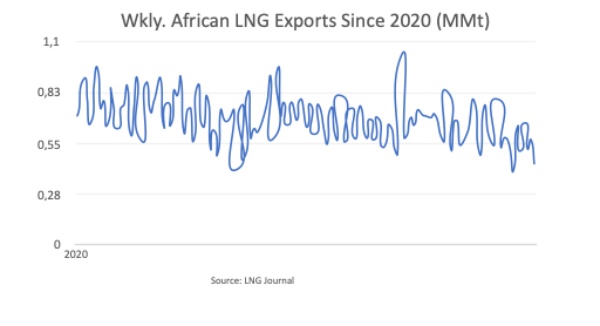 Eni has hitherto refrained from announcing an official start-up date and has given only ‘the second half of 2022’ as a horizon for LNG shipments to begin.

The FLNG unit arrived at its final operating site offshore Mozambique in early January and received its first gas in June this year.

A source speaking to Upstream in July pointed out that the date for first LNG could be moved forward to late September.

Notably, Mozambique’s ruling FRELIMO party is holding its 12th Congress from 23 to 28 September, during which President Filipe Nyusi's future and the choice of his successor for the 2024 presidential election will become clearer. Mozambique’s national oil company (Empresa Nacional de Hidrocarbonetos, ENH) holds a stake in the Coral Sul project.

Coral Sul will be supplied with feedgas discovered in Area 4 of the Rovuma Basin located off Mozambique’s coast.

The project involves a floating plant with a capacity of 3.4mtpa, all of which has been committed to BP’s global LNG portfolio for 20 years (with an optional 10-year extension).

The gas is sold through the Area 4 concessionaires comprising CNPC, Galp, KOGAS, Mozambican state-controlled ENH and Exxon Mobil through its local subsidiary.

LNG from Mozambique will be a welcome addition to a tight market and may slow the long-term decline of Africa’s LNG exports.

The FLNG barge comprises 13 topside modules and was built in South Korea by a consortium comprising Samsung Heavy Industries, Japan’s JGC and Technip Energies of France under a $2.5bln contract awarded in 2017.

Construction of the main components began in 2018.

Eni has operated in Mozambique since 2006. Between 2011 and 2014 the company discovered an estimated 2.4 trillion cubic metres of gas in place in the Rovuma Basin’s Coral, Agulha and Mamba Complex reservoirs.

As we have reported previously, political turmoil has disrupted the development of a US$30-billion onshore LNG facility by ExxonMobil.

As a quick workaround, Eni has thus proposed a second FLNG plant to fast-track the monetisation of the development consortium’s gas reserves in the Rovuma basin.

Although no final investment decision had been made at the time of writing, Eni CEO Claudio Descalzi told analysts during a 2Q earnings call on 29 July that Eni’s partners “are positive” on the proposal.

The proposed FLNG unit would be smaller than the current one in capacity terms, ranging between 2.5 and 3mtpa.