Malaysia’s national oil and gas company Petronas has sought to defer up to 20 LNG cargoes for December-March delivery by exercising downward quantity tolerance (DQT), Platts reported citing unnamed sources. Whilst Petronas has not commented on the latest reports, the company had already tried in September to temporarily reduce future cargo deliveries. At the time, production issues at the important Pegaga offshore gas field were cited. Although Malaysia managed to increase production at Bintulu in October from a trough in September, exports have taken a hit last week. Meanwhile, the global LNG market remains tight.

Petronas – Malaysia’s national oil company that also operates the country’s LNG capacity – has sought to defer or even cancel between 15 and 20 LNG cargoes or more that would have had delivery horizons ranging from December to March, according to Platts. Our data indicate the total cargo volume affected would be between 1.0 and 1.2mmt. 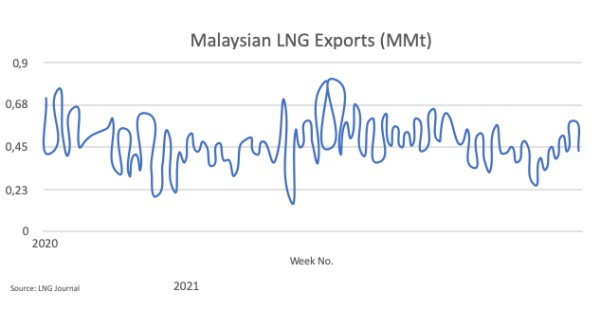 LNG importers have confirmed to Platts that Petronas has issued notices of intent to exercise downward quantity tolerance, or DQT, from the MLNG Satu and Dua projects at the Bintulu LNG complex. Such an export reduction would come at an inopportune time as these cargoes were scheduled for delivery during the Northern Hemisphere winter.

DQT is the right exercised by a supplier to reduce contracted volumes by a fixed percentage, which usually is around 10pct, in the event of unusual circumstances. The DQT notices also suggest that Petronas was unable to bridge any immediate shortcoming with alternative supplies or business agreements.

Whilst Petronas has not commented on the current circumstances, reports in September indicated the Malaysian LNG champion had already approached offtakers from Bintulu’s LNG Tiga facility with requests for delays to their November-January deliveries. The reason given was production issues at Malaysia’s Pegaga offshore gas field, where high levels of mercury were detected. The Pegaga field is intended to become one of Malaysia’s key gas sources.

At the time, Argus reported that market participants were expecting that reluctance among buyers to agree to scheduled delays from LNG Tiga means Petronas would have to approach offtakers from the MLNG Satu and Dua projects later to request scheduled delays to their deliveries.

Although our data indicate Malaysia managed to increase production at Bintulu from a trough in September – increasing LNG exports by 33pct month-on-month to 1.74mmt in October – Bintulu’s LNG output still trailed its year-on-year equivalent of 2.12mmt by 18pct. Additionally, exports decreased by 27pct week-on-week last week.

With LNG prices remaining very high, buyers are likely to have difficulties bridging any gap left by delayed Malaysian deliveries with spot cargoes. The S&P Global Platts JKM for December was assessed at above $29/mmBtu last week.

Smaller Japanese gas facilities for which Malaysian LNG cargoes represent the bulk of supply – e.g., Tohoku Electric Power’ Shin-Sendai facility – are likely to be particularly affected. A reduction of 1-2 cargoes per month is more difficult to absorb for projects with a smaller operating footprint. Shin-Sendai LNG receives around three shipments per month, with more than 65pct of cargoes having originated in Malaysia, our data show.