With the commissioning of the 22mtpa Al Zour LNG terminal (full capacity to be reached by 2022), Kuwait has emerged as the leader in Middle Eastern import capacity. Historically, Kuwait’s crude oil output has dwarfed its gas production, meaning the country has been compelled to import LNG for cleaner electricity production.

The new Al Zour facility will be key in ramping up Kuwaiti LNG imports, our data indicate, as well as offering the potential for LNG deliveries to neighbouring Saudi Arabia, which itself is preparing for an energy transition away from crude oil by 2030 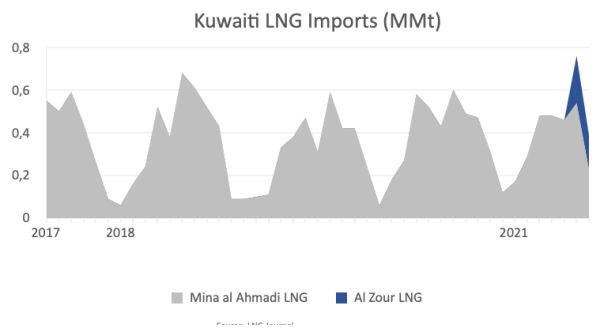 The 0.09mmt cargo aboard the Q-Flex Al Kharsaah had departed Ras Laffan in Qatar on 10 July, our data show.

“At Qatargas, we are honoured to have been able to supply the commissioning cargo to this landmark facility in co-operation with our strategic business partners at KPC.

The successful commissioning of this LNG receiving terminal will contribute towards strengthening our business relations with KPC."

Kuwait has a 15-year contract with Qatar Petroleum to buy 3.0 million tonnes per annum (mtpa) of LNG for Al Zour. KPC plans to buy a further contingent of 3.50mtpa from other suppliers.

In addition to the commissioning cargo by the Al Kharsaah in mid-July, the Al Zour terminal has seen four more cargoes arrive, totalling 0.29mmt. This includes a French re-export from Dunkerque Le Clipton via the Yari LNG that arrived on 2 August.

The Al Zour LNG terminal will have a capacity of 22.0 million tonnes per annum (mtpa) once fully completed in 2022 and was developed by KPC’s subsidiary Kuwait Integrated Petroleum Industries (KIPIC).

The facility’s design capacity makes it easily the largest import terminal in the Middle East, which has hitherto relied on FSRU installations for LNG imports, including Kuwait’s own Mina al Ahmadi FSRU terminal.

Kuwait is among OPEC’s most significant crude oil producers but has a relatively small gas resource base. The country has been importing LNG for several years with demand on a continued growth trajectory.

Notably, the terminal is only roughly ten miles away from Kuwait’s border with Saudi Arabia.

The country is keen to curtail its crude oil consumption to produce electricity by roughly 1 million barrels a day by 2030. The country plans to transition at least in part to gas-driven power production, complementing expansion in solar and wind energy.