Amidst a gas shortage underpinned by relatively low prices and protracted COVID-19 restrictions, Argentina is looking to increase its annual LNG imports by roughly 25pct this year, on our estimate.

Argentina is looking to further increase its LNG buying this winter in a bid to avoid a gas supply shortfall. State-run oil and gas company Integración Energética Argentina (IEASA) has issued a tender seeking 13 further shipments for delivery between May and August to Bahía Blanca, according to the Buenos Aires Times. These cargoes would bolster a previous tender round of 24 shipments and are reportedly earmarked for an unidentified FSRU that has yet to be deployed at the Port of Bahía Blanca, presumably on a short-term charter to bridge the winter period. 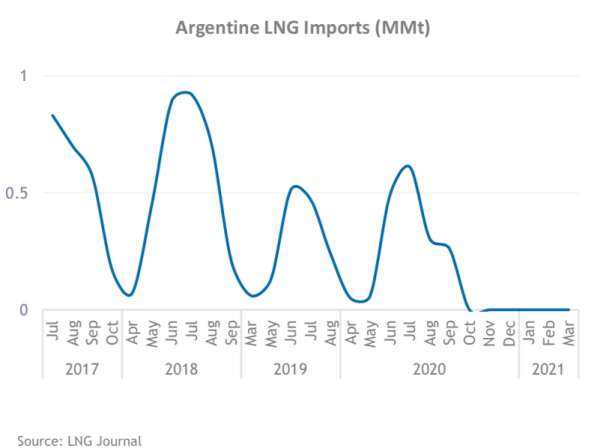 Argentine LNG imports have been trending downwards since 2018, our data shows. If the latest 13-cargo tender is fully awarded, we estimate the country’s total LNG imports to reach around 37 cargoes totalling 2.22mmt this year, up by roughly 25pct over last year. IEASA has already contracted 24 cargoes for delivery to its FSRU unit at Escobar at the Paraná river later this year, led by supply from BP and Gunvor.

LNG Imports at Bahía Blanca ceased in 2018 when Argentina’s oil and gas major YPF was keen to offset at least some of the country’s energy bill through LNG exports via the Tango FLNG barge. Moreover, there was hope of being able to cover seasonal demand growth with Argentina’s own shale gas.

Nevertheless, low prices and the coronavirus pandemic have slowed new drilling that is necessary to sustain production. As the LNG Journal reported last year, Argentina’s protracted struggle with COVID-19 has compounded pressure on the country’s gas supply as it lacks sufficient gas storage capacity to bridge seasonal spikes. This was exemplified by YPF being forced to declare force majeure on its Tango FLNG plant in late June last year, halting shipments to buyers and payments to service providers. National gas output – including shale gas – had decreased by 12pct year-on-year in July 2020 and by 15pct year-on-year in February, according to data from the Energy Secretariat. This led to a fuel shortage and the government's subsequent decision to increase imports for this year’s winter in the southern hemisphere.

Meanwhile, the GNL Escobar GasPort has had its suspension lifted by a judicial ruling in January following an appeal by the Argentine government – represented by the Energy Secretariat – alongside state-backed energy company YPF, which operates the FSRU unit. The country’s only remaining import terminal had been ordered closed in October last year on safety concerns. In his submissions to the court, Secretary of Energy Martínez highlighted ‘the urgent need to lift the closure of the Escobar Terminal for LNG Regasification immediately’ and warned of gas shortages in the upcoming Argentinian winter.