China levies sanctions on US LNG, turns to Qatar instead

As the US-China trade war escalates, Beijing says it has “no chance but to retaliate” new trade tariffs imposed by the Trump administration. Effective September 24, the Chinese President Xi Jinping implemented a 10% tariff on US LNG imports , casting a shadow over projected new US export terminals. China used to be the No.2 buyer of US LNG, but state-owned PetroChina already suspended buying American gas and opted to enter a 22-year purchase agreement with Qatargas.

Spot markets are alarmed by the impact of tariffs on energy trade between the world’s two biggest economies. In the twelve months up until June 2018 China has been the second largest buyer of US LNG globally, accounting for about 3 mtpa, mostly purchased through Shell as an intermediary.

Goldman Sachs analysts warned the tariff could “effectively end direct LNG trade” between American exporters and Chinese importer, or at led to a fast drop in purchases of spot LNG cargoes.

Wood Mackenzie research director Giles Farrer, meanwhile, said short-term consequence will be less than previously indicated. “This is partly because the level of the tariff is lower than initially proposed, 10% now vs. 25% in August, but also because we think China has already completed the majority of its procurement for winter,” he said, explaining: “Possibly because of this, we have recently seen spot and futures prices for winter come down despite strengthening oil prices.”

If China still needs to procure spot cargoes, this will most likely result in a premium of up to 10% on supply from non-American, lean sources like the Australia East Coast projects, Tangguh, Gorgon or the Qatari Mega-trains. Wood Mackenzie said, suggesting Chinese buyers' appetite to pay significantly higher prices for LNG from other sources will probably be limited by the price they can sell gas domestically.

Sanctions may hamper 2nd wave of US LNG projects

Consequences will, however, be felt in the long term because the tit-for-tat policy on sanction by Beijing and Washington ultimately restricts the target markets for developers of new US LNG projects trying to sign new long-term contracts. For now, there is still plenty of appetite for second wave US LNG projects from other buyers in Asia and Europe, as evidenced by recent contracting momentum at Freeport, Calcasieu Pass and Sabine Pass Train 6.

“The first wave of US LNG projects was successful, despite not signing contracts with Chinese buyers,” Mr. Farrer pointed out. In consequence, “it could also support development of other projects outside of the US targeting the Chinese market (including Russia pipeline projects), potentially allowing them to push for higher long-term contract prices.

“The recent deal between PetroChina and Qatar is evidence of this,” he said. Qatargas, the world’s largest LNG producer, in early September stuck a 22-year sales and purchase agreement with PetroChina to deliver around 3.4 mtpa of LNG its regasification terminals at Dalian, Jiangsu, Tangshan and Shenzhen.

In August, China brought two new regas terminals in service which brought the overall number to 19 – in line with the government’s policy to replace coal with natural gas in the power sector. The two newly commissioned LNG regas terminals are situated at Zhoushan in the eastern Zhejiang province, and at Dapeng in Guangdong. The additionally contracted Qatari LNG supplies to China will come from the Qatargas II project at Ras Laffan, jointly owned by Qatar Petroleum, Exxon Mobil and Total. The emirate of Qatar currently produces 77 mpta of LNG but an expansion project is underway to bring total output to over 100 mtpa by 2024.

In addition to LNG, China also imports substantial quantities of pipeline gas from Turkmenistan, Kazakhstan and Uzbekistan, and some smaller volumes through the Myanmar-China pipeline. A further boost will come from the long-awaited start of Russian gas imports through the ‘Power of Siberia Project’, scheduled for 2019.

Demand for natural gas in China is skyrocketing after the central government implemented clean-air directives that effectively forbid the use of coal for power generation in megacities - Shanghai, Beijing, Chongqing, Guangzhou, Tianjin and Shenzhen.

Taking bold steps to curb air pollution, China’s State Council extended the reach of the three-year 'blue sky defence' action plan in July 2018 to include cities in Shanxi, Shaanxi and Henan provinces. The target area now includes ‘2+26’ cities and prioritizes switching from coal to gas for winter heating and power generation, as well as renewables.

Accelerating air pollution now affects a region with 37% of China's population. Keen to also limit emissions, the government pushes for a shift to cleaner fuels such as LNG in the power and transport sector.

As a quick fix, inefficient coal-fired power units under 300 MW will retired and China’s State Council stipulates to replace this capacity with high efficiency, low emission (HELE) units, mostly fuelled by natural gas. Henan and Guangdong provinces, alone, have announced they will close 1 GW of coal power capacity each this year.

Free Read
More to read: « Germany to build LNG terminal as “gesture to our American friends” Williams gets FERC approval to place Atlantic Sunrise in service »
back to top 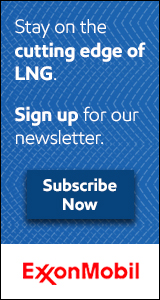