The LNG carrier Pskov lifted Portovaya LNG’s inaugural cargo in mid-September, our data show. At the time of writing, the Velikiy Novgorod was in the process of loading the second. The plant had previously been subject to repeated delays since 2018. However, given its relatively small capacity, Portovaya is unlikely to materially lift Russia’s LNG market share. 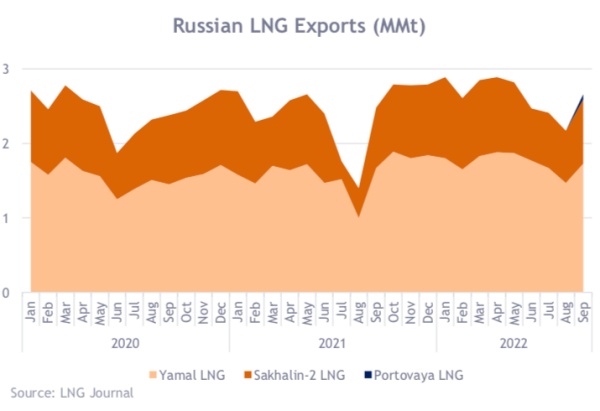 Our data show the LNG carrier Pskov lifted 0.07mmt cargo from the Portovyy FSU on 13 September and delivered it to the Revithoussa terminal in Greece late on Monday.

The cargo marks the inaugural commercial cargo lifting from Russia’s new LNG outlet in the Baltic. At the time of writing, the LNG carrier Velikiy Novgorod was preparing for another cargo loading.

The plant’s market entry had been subject to repeated, but unspecified, delays since 2018.

Portovaya LNG is designed to produce 1.5 million tonnes per annum and will source feedgas via the Gryazovets-Vyborg trunkline – which had previously been supplying Nord Stream’s Line 1 – from Gazprom fields in Western Siberia and the Yamal Peninsula.

The Portovaya plant will use Linde's LIMUM technology to cool down its feedgas.

The Nordstream 2 consortium did not manage to have the second trunkline along the Baltic seabed approved in 2021 whilst Russia’s invasion of Ukraine in February 2022 has resulted in both EU and Russian sanctions that resulted in a full stop of Russian pipeline gas exports to Western Europe.

LNG flows from Portovaya are but a trickle compared to what would have been exported via the Nordstream trunklines.

Nevertheless, exports from the small Baltic outlet form part of ongoing growth in Russian LNG exports both from Yamal LNG in the Atlantic Basin and Sakhalin-2 LNG in the Pacific, our data show.

This growth has mainly been underpinned by exports to Japan, France and China.

However, China received the bulk of additional cargoes from Yamal LNG via the Northern Sea Route (NSR) and therefore are going to be seasonal, our historical data indicate.

The current generation of ice-breaking LNGCs are only able to routinely make the NSR journey during the Northern Hemisphere’s summer months due to limited availability of dedicated ice breaker support when the ice becomes too thick during the winter months.