The first direct contract between a US LNG producer and a PTTGL, the LNG buying arm of Thai state-controlled energy champion PTT, comes at a time when US LNG market share in Thailand is on the rise.

Concurrently, PTT has been hard at work expanding the country’s regasification capacity from an initial 5mtpa in 2011 to an expected 19mtpa by the end of this year.

The Thai government is keen to mitigate risk from both a shortage in available spot cargoes and the potential drying up of Burmese pipeline gas supply should economic sanctions intensify. 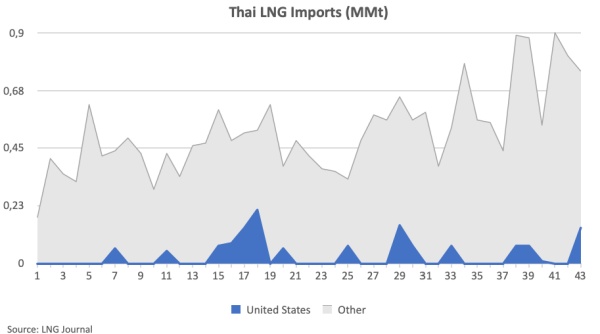 Under the sale and purchase agreement (SPA), PTTGL has committed to buying 1.0 million tonnes per annum (mtpa) of LNG from Corpus Christi LNG for twenty years beginning in 2026.

The LNG purchase price under the SPA will be indexed to the Henry Hub price. In typical fashion to US LNG contracts, PTTGL will also pay a liquefaction fee.

The SPA calls for a combination of free-on-board (FOB) and delivered ex-ship (DES) transactions.

“We are pleased to enter into this 20-year SPA with a subsidiary of PTT, the state-owned oil and gas company of Thailand which developed, owns and operates Thailand’s first LNG import terminal, and is an energy leader in a key, fast-growing Southeast Asian market,” said Jack Fusco, Cheniere’s President and Chief Executive Officer, in a statement.

US LNG has hitherto played a relatively minor role in Thailand’s LNG supply, our data show, although that role has been growing since June.

The bulk of existing US supply is furnished through PTT portfolio contracts with Shell and BP. Meanwhile, available spot supply has dwindled since Europe has entered a gas crisis and began soaking up available cargoes, including from the Pacific Basin.

Accordingly, Cheniere celebrated its contract with PTTGL as “the first direct LNG contract from a US LNG producer for PTTGL, and this agreement not only reflects the critical need for long-term, reliable LNG supply across the globe, but also the important role LNG has to play in powering growing economies for decades to come.”

PTT also emphasised its “target to be a Global LNG Player by managing an LNG portfolio of 9mtpa by 2030.” Auttapol Rerkpiboon, PTT’s President and Chief Executive Officer highlighted that Thailand’s regasification capacity is set to increase to 19mtpa by the end of this year.

As we reported in June, Thailand has steadily expanded its LNG infrastructure. The Map Ta Phut terminal came onstream in 2011 with an initial capacity of 5mtpa.

The terminal’s capacity was subsequently expanded to its current 11.5mtpa. Meanwhile, the Nong Fab terminal has been under construction in the Southeast of the country and will have a capacity of 7.5mtpa by end-2022.

The Thai government is keen to mitigate risk from a potential pipeline gas supply outage from neighbouring Myanmar, which has been subject to increasing pressure from sanctions.

“Our new vision Powering Life with Future Energy and Beyond reflects the strategic direction and business transition toward clean energy as well as new businesses.

LNG or gas is a major transition fuel which supports both energy security and sustainability. Our ambition is to move forward with the future energy while ensuring energy security […]”, Rerkpiboon said.