Growing domestic opposition to ever-increasing US LNG exports notwithstanding, the country’s shipments of the super-chilled fuel climbed to a new record last week. The bulk of last week’s cargoes are destined for Europe where a protracted gas shortage keeps US LNG producers keen to push for ever-higher output.

The highest weekly US export level on record also coincided with the maiden cargo of Venture Global’s new Calcasieu Pass LNG project being loaded onto the LNG carrier Yiannis.

US LNG exports climbed to a new weekly record last week, our data show. Exports from the six fully operational plants grew by 0.54mmt (39pct) to 1.93mmt last week from 1.39mmt the week prior.

This represents a new record in weekly exports for the country and places last week among the highest week-on-week growth instances since US LNG exports began. 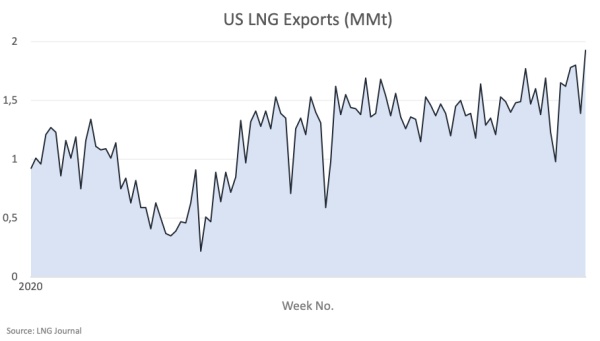 There was also a single cargo aboard the Diamond Gas Crystal headed for the Salvador FSRU in Brazil as well as two cargoes that still had to declare their destination.

Whilst US LNG exports to Europe come at a time the continent is suffering from a protected gas shortage – which has contributed to a tight market and, in turn, incentivized US LNG exports – there is growing resistance within the United States to ever-rising gas exports.

Last week, a group of ten senators equally called for the Department of Energy to limit LNG exports and consider halting permit approvals until the effects of continued export growth on the domestic gas market had been studied. “Despite the heavy burden rising natural gas prices has placed on American families, the U.S. is exporting record levels of natural gas to other countries, a trend that is only expected to continue,” the senatorial group argued in a letter to the Energy Secretary.

“Projections of exponentially increased U.S. exports will cause real harm to American families’ ability to pay their home energy bills.”

The newbuild Yiannis was in the process of loading the facility’s maiden cargo at the time of writing, having arrived at the plant on Monday last week, our data show.

The plant received permission to begin commercial cargo loadings earlier than planned. At the beginning of the year, Venture Global had received US regulatory approval to begin commissioning the first two-train block with feedgas. Feedgas supplies have been ramping up throughout January.

The LNG project will add annual capacity of 10mmt to the global market.