Previously, in July and August this year, European gas stocks had seen some of their lowest summer levels since 2018.

Following a severe tightening of the global gas market resulted in a protracted slowdown in European LNG imports since June. European LNG importers struggled to compete against Asian buyers in particular as spot prices kept climbing. 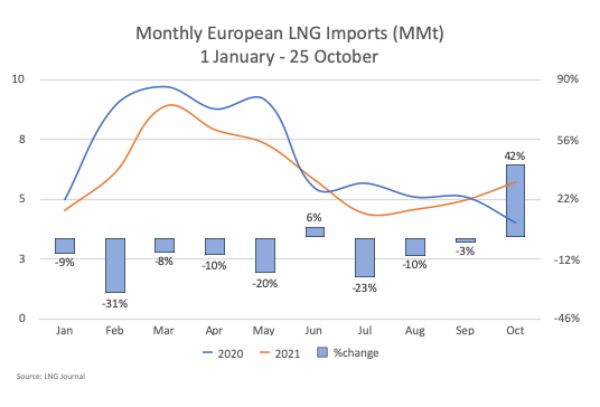 China in particular has been determined to outbid other regional buyers for free available cargoes even as coal futures and Asian LNG spot prices have exploded.

In an emergency meeting chaired by Vice Premier Han Zheng China’s in September, China’s central government ordered state-owned energy conglomerates to do whatever it takes to avert blackouts, Bloomberg reported.

Even before the Vice Premier’s intervention, China had become the world’s most prolific LNG importer in volume terms during the first nine months of the year, surging past Japan and South Korea, our data show.

However, our data indicate European buyers have begun to grow LNG imports quickly, increasing offtakes by 42pct month-on-month at the time of writing.

Imports into Europe surged by 1.69mmt during the first 25 days of October this year compared to the same period last year.

This contrasts sharply with the relatively lacklustre European LNG demand during much of the summer. European gas storage levels have been low since summer, offering relatively little buffer for a power demand surge in winter.

European LNG demand ahead of winter has surged in October this year whereas last year this did not happen before November.

This likely reflects an expectation of a protracted tight market and commensurate high – if not higher – prices in November as winter sets in the Northern Hemisphere. Meanwhile, European gas prices had briefly slipped to below $35/MMBtu in mid-October as the prospects of more pipeline gas supply from Russia gained traction.

However, there is still little prospect of global LNG prices easing to below $30/MMBtu before March next year, Platts JKM Futures quotes suggest.

Expectations of continued elevated Asian LNG demand has prompted US gas player Cheniere to bet on Asia in future expansions to its business.

Similarly, Qatar continues to push ahead with projects to boost its LNG production capacity before the end of the decade.

LNG – one of the leading transition fuels – thereby constitutes one of the few significant growth areas for hydrocarbon producers, who have faced calls to stop investments in new hydrocarbon assets and allow existing ones to expire as the world shifts to renewables.