With the originally intended FSU Torman II still at Singapore’s Sembawang shipyard, Tema LNG’s interim replacement Vasant 1 has arrived offshore Ghana in late May. However, our data indicates the vessel is not carrying Tema LNG’s commissioning cargo, suggesting the terminal’s start-up will be delayed to later in June.

Ghana’s plans to become sub-Saharan Africa's first LNG importer are likely to be delayed to later in June, our data indicates. The country was originally expected to receive its commissioning cargo at the new Tema LNG terminal by the end of May. The terminal is ‘operationally ready’, according to a project spokesperson speaking to S&P Global Platts at the beginning of May. 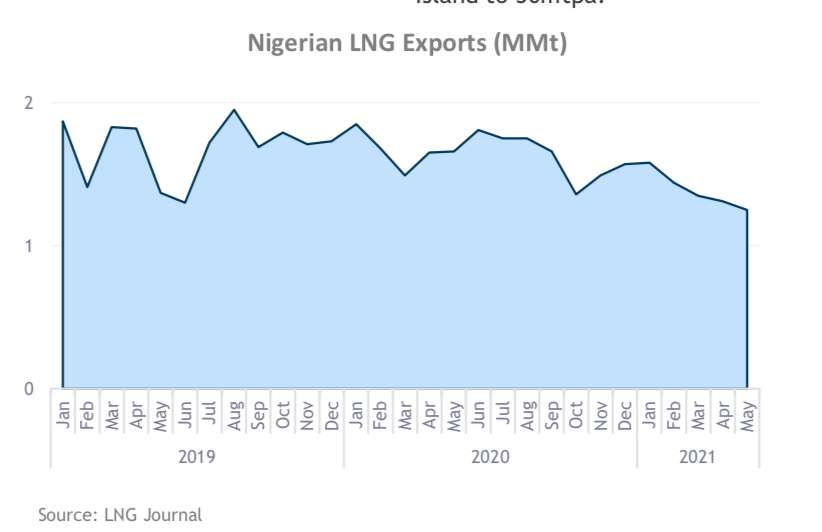 The project originally comprised the Torman LNG FRU and a Moss-type LNG floating storage unit (FSU), named Torman II, which was converted from the LNG carrier LNG Flora. However, our AIS data showed in late May the Torman II was still at its Sembawang shipyard in Singapore. The reasons for the delay could not be ascertained at the time of writing.

The Tema LNG project likely sub-chartered the FSU Vasant 1 from India’s Swan Energy to take on the role as dedicated storage vessel for the Ghana LNG project. The 180,000m3 vessel arrived off Ghana’s Tema port on 26 May but has not approached the Torman FRU, according to our data. The Vasant1 is not carrying Tema LNG’s commissioning cargo, our data also suggests.

LNG will be supplied under a long-term contract with Shell. The company indicated earlier this year that it was seeking to enhance its LNG market position by unlocking new markets. Shell did not specify the timing or origin of Tema LNG’s commissioning cargo; our market visibility did not indicate a laden LNG carrier en route to Ghana at the time of writing. However, we highlight that Shell holds a roughly 26pct share in the Bonny Island LNG complex in neighbouring Nigeria. Ghana already imports gas from Nigeria via the West African Gas Pipeline (WAGP), but this supply is frequently hampered by interruptions, making LNG an attractive alternative.

Shell announced it would invest in a seventh train at Nigeria’s Bonny Island LNG complex on 13 May. Once operational, the new train will expand capacity at Bonny Island to 30mtpa.

TGE Marine Gas Engineering commissioned the construction for a 28,000 m3 capacity barge-type FRU, including the design and supply of the cargo handling system and tank material package, with Chinese shipbuilder Jiangnan Shipyard. French certification company Bureau Veritas completed the barge’s classification in March. The unit had arrived in Ghana from China in January.

The FRU’s tank system comprises two ISO cylindrical tanks with nameplate capacity of 14,000m3 each. Five modular compact regasification skids will provide a peak send-out rate of 335 t/h or roughly 2mtpa. The FRU unit is part of a flexible design intended to work in parallel with a larger floating storage unit (FSU).

To date, Africa’s only country to import LNG has been Egypt via its FSRU capacity at Ain Sokhna. Commissioning of Ghana’s Tema LNG terminal will expand the continent’s LNG map to the sub-Saharan region. As in Southeast Asia, LNG in Africa is seen as a relatively quick and inexpensive way to meet growing gas demand for power generation in the coming years.

Free Read
More to read: « Avenir LNG’s HIGAS LNG Terminal on Schedule LNG from Queensland Dips in May but Full-year Growth Prospects »
back to top