The widely reported surge in coronavirus cases in India has resulted in a drop in LNG demand. This has led to some cargo diversions, according to our data. However, in the absence of a national lockdown, the majority of LNG flows to country remained intact as of Monday whilst the demand drop was also not as severe as that of April last year.

Several LNG cargoes have been diverted away from destinations in India following a dramatic surge in coronavirus cases in the country.

The ensuing crisis has negatively impacted gas demand as lockdowns imposed in several parts of the country have taken effect. India reported more than 300,000 new coronavirus cases for a twelfth day in a row to take the overall number of patients to close to 20 million people on Monday. 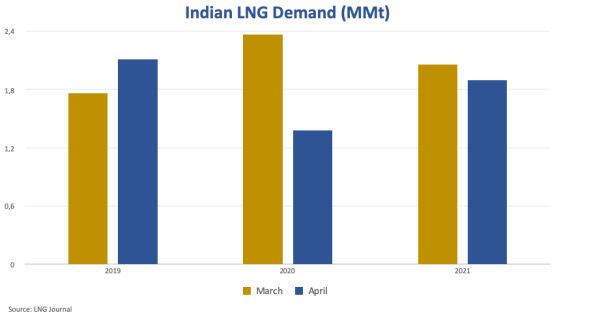 India’s gas demand had dropped by 0.16mmt to 1.90mmt in April, down 8 percent from the 2.06mmt we recorded in March after taking into account the likely original cargo load level and in-transit boil-off.

However, the decrease was not to the same extent seen in April last year, when demand plummeted by 0.98mmt (-42 percent) month-on-month. Typically, Indian LNG demand begins to climb in April.

At the centre of cargo diversions was the Dahej terminal, India’s busiest LNG destination.

Our data shows up to three cargoes have been diverted over the past few days alone, including the GasLog Greece, which had been circling in the Arabian Sea to deliver an EG LNG cargo to Dahej since 25th April.

The vessel was finally diverted to an undisclosed new destination late on Monday. Similarly, the Angola LNG-derived Cubal was heading for Dahej but had also been diverted to Fujian LNG in China by the evening that day.

Meanwhile, the GasLog Savannah had already made an approach to Dahej on Tuesday morning but changed course. It remains to be seen whether the vessel is merely waiting to enter port due to scheduling or has indeed been diverted.

On Monday, 12 states and union territories were reportedly imposing different levels of restrictions – ranging from lockdowns to curfews – to slow the spread of the virus.

At the time of writing, however, the government remained reluctant to impose a national lockdown.

The absence of a full national lockdown may well be responsible for the majority of India-bound cargoes to remain en route on Monday evening as market participants monitor the situation.

For example, the Bonny Island-derived LNG Adamawa remains on course to arrive at Mundra LNG next week whilst the Pskov, carrying a Cameroon FLNG-derived cargo, is still expected at Dahej later this week.

Meanwhile, our data indicates cargoes from the UAE and Qatar remain broadly on schedule, including the Dahej-bound Mubaraz, the Dabhol-bound Umm al Ashtan and the Raahi.

Another vessel typically employed in delivering LNG to Dahej – the Petronet-controlled Disha – was in the process of completing its latest journey to Dahej.

However, we highlight that the vessel carried a slightly lighter load than usual, according to our data and calculations. The UAE and Qatar are among India’s most significant LNG suppliers.