The Argentine government headed an industry push aimed at lifting a ban on LNG imports via the country’s only remaining terminal, stationed in Escobar county.

Last week, a federal judge lifted the terminal’s suspension. The government had warned of looming gas shortages should the terminal remain unavailable ahead to the upcoming colder months between May and September.

The request to lift the suspension came at a time when the country’s Energy Secretariat is keen to promote the national gas market.

Argentina’s GNL Escobar GasPort has had its suspension lifted by a federal judge ruling last week. The country’s only remaining import terminal had been ordered closed in October last year on safety concerns.

Last week, Argentina’s Secretary of Energy, Darío Martínez, filed for the immediate lifting of the judicial closure of the Escobar regasification terminal at the Federal Court of Campana. 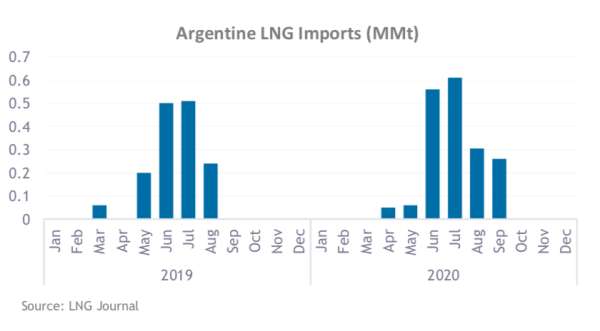 No risk of explosion

In a report on the ‘impact of the non-operation due to the closure of the Escobar terminal on the provision of natural gas in the country’ the government – represented by the Energy Secretariat – alongside state-backed energy company YPF, which operates the FSRU, and other companies and entities involved asserted that there was no risk of an explosion.

The federal court accepted the parties’ submission and lifted the terminal’s suspension.

In his submissions to the Court last week, Secretary of Energy Martínez highlighted ‘the urgent need to lift the closure of the Escobar Terminal for LNG Regasification immediately’ and warned of gas shortages in the upcoming Argentinian winter otherwise.

The reopening of the Escobar terminal coincides with the government seeking to boost gas production over the next four years. National gas output had decreased by 21% to just 114 million cu m/d in December 2020 from roughly 144 million cu m/d in July 2019, according to data from the Energy Secretariat.

FSRU to be readied for winter

With national gas production in decline even during the high-production period of summer, the government is keen to stem the gas output slide ahead of the country’s winter months (June-August).

However, this is likely to be challenging since the government also anticipates the Argentine economy to rebound in 2021. This would most likely increase gas demand and underscores the government’s push to have the GNL Escobar GasPort terminal reopened in time to allow for cooldown and any necessary maintenance.

The government’s ‘Gas.Ar Plan’ seeks to replace more than 30 billion cu m of imports with domestic production to generate foreign exchange savings of c. US$9.3 billion and a fiscal saving of more than US$2.5 billion by 2024.

he Plan also entails a pricing stimulus program to encourage investment in the energy sector helped by price stability measures.

Argentina relies on LNG imports to supplement domestic production in the cold months between May and September.

Martinez welcomed the Court’s decision, announcing on Twitter that ‘now we have the peace of mind that we can count on Escobar's strategic plant to plan with certainty the comprehensive program to supply gas to meet demand in the coming months.’

Argentina’s Energy Secretariat is a centralised dependency within the Federal Ministry of Productive Development. The department is the primary regulator of Argentina’s energy industry – including hydrocarbons and electricity – in charge of the development and implementation of national energy policy.