Croatia became Europe’s latest LNG importer with the commissioning of the Hrvatska terminal on Krk Island on 1st January 2021.

Following a protracted tussle over costs, what originally planned as a large-scale onshore terminal has been implemented as a more cost-efficient FSRU. Apart from supplying Croatia, the Golar-operated Croatia FSRU is also likely to help Hungary to bridge a gap resulting from expired Gazprom contracts. 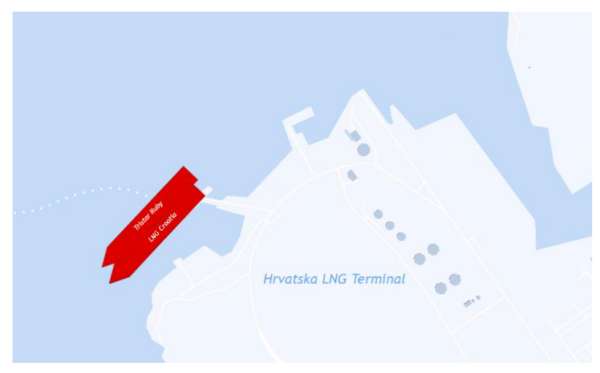 The BP-chartered LNGC had left Cove Point LNG in the United States on 19th December and arrived at Croatia’s new Hrvatska LNG terminal on 1st January. The terminal thus entered the market on schedule.

In November, the project’s FSRU – the LNG Croatia – sailed out of Spain’s Sagunto terminal in Spain with its cooldown cargo, our data indicates.

The terminal is connected to Croatia’s gas transport system by a 4.2-kilometre-long connecting gas pipeline to the new Omisalj-Zlobin pipeline, which was completed in November.

The terminal can achieve peak gas throughput of 300,000 m3/h and has an annual capacity of 2.6bcm.

According to our database, the Croatia LNG terminal will be capable receiving even Qatar’s giant Q-Max LNGCs.

Majority of capacity leased out

Golar Power is set to operate the terminal for the next decade.

The company won the contract to convert and supply the FSRU two years ago for a reported €159.6 million.

At the time of writing, roughly 80% of the terminal’s capacity had been leased until 2027, with capacity commitments tapering out to 50% by 2035. Among the capacity leaseholders are MFGK Croatia – a local subsidiary of state-owned Hungarian Electricity Works (MVM) – as well as Croatian gas suppliers INA and HEP.

Part of supply going to Hungary

As such, not all of the imported gas via the Hrvatska terminal on Krk Island will supply Croatia as MVM is set to redirect a significant portion via pipeline to Hungary.

Over recent years, the country has significantly expanded the construction of interconnectors in line with EU supply diversification and market integration policy.

Shell agreed to supply MVM with 0.25bcm per year. The energy major’s delivery of LNG to Krk Island is likely to prove important in bridging Hungary’s loss of a significant share of its long-term gas supply from Russia.

Two of the country’s gas supply contracts with Gazprom expired in 2019, with another two set to fade out in 2021.

The LNG Croatia is the converted Golar LNG vessel Golar Viking and has a nominal capacity of 140,000 cubic metres.

Originally commissioned in 2005, the LNGC completed its conversion to FSRU at China’s Shanghai China Resources Dadong Shipping Engineering Co. (a subsidiary of Hudong-Zhonghua Shipbuilding) in September this year.

The shipyard is also part of China State Shipbuilding Corporation (CSSC) and the project marks the first time a Chinese shipbuilder has completed such a complex conversion.

Among the works carried out were the installation of a seawater heating and regasification module. Other modifications included a dual-fuel power station and boil off gas treatment system as well as a gas transmission system and electrical modifications.

LNG project in discussion since 1992

The project was first proposed as a large-scale onshore terminal in 1992.

A feasibility study was completed in 2008 with an environmental impact assessment and location permit following in 2010.

Completion of the project was originally scheduled for 2014 but was cancelled due to cost issues.

The project was revived as a smaller FSRU terminal to reduce costs in 2015. Construction began in January 2019.