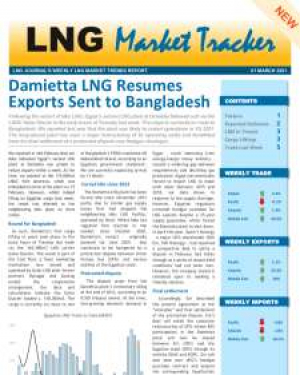 The cargo is currently en route to Bangladesh. We reported last year that the plant was likely to restart operations in 1Q 2021. The long-absent plant has seen a major restructuring of its operating entity and benefitted from the final settlement of a protracted dispute over feedgas shortages. 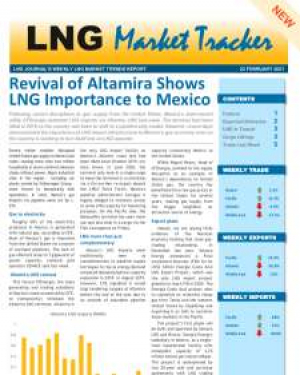 The terminal had been idled in 2019 as the country was keen to shift to a pipeline-only model. However, recent days demonstrated the importance of LNG import infrastructure to Mexico’s gas economy even as the country is working to turn itself into an LNG exporter.

Major industrial sites in the region – including car plants owned by Volkswagen Group – were forced to temporarily halt operations. In total, Mexico’s gas imports via pipeline were cut by c. 25%.

Roughly 60% of the electricity produced in Mexico is generated with natural gas, according to CFE. Most of Mexico’s gas is imported from the United States via a system of overland pipelines.

This forced CFEnergia, the fuels generating and trading subsidiary of Mexico's state-owned utility CFE, to (temporarily) reinstate the Altamira LNG terminal. Altamira is the only LNG import facility on Mexico’s Atlantic coast and had been idled since October 2019, our data shows.

In June 2020, the terminal only took in a single cargo to keep the terminal in a cold state via a Fos-sur-Mer re-export aboard the LNGC Point Fortin. Mexico's pipeline administrator Cenagas is legally obliged to maintain access to some LNG capacity for balancing purposes.

On the Pacific side, the Manzanillo terminal has seen more use and also took in a cargo via the Flex Courageous on Friday.

In August 2019, however, CFE signalled it would stop tendering cargoes at Altamira before the end of the year due to an outlook of abundant pipeline capacity connecting Mexico to the United States.

Whilst Miguel Reyes, head of CFEnergia, pointed to the supply disruption as an example of Mexico’s dependency on United States gas, the country has benefitted from low gas prices in the United States for several years, making gas supply from the bigger neighbour an attractive source of energy.

Indeed, we are seeing little evidence of the Mexican economy limiting that close gas-trading relationship. In November last year, Sempra Energy announced a Final Investment Decision (FID) for its US$2 billion Energía Costa Azul LNG Export Project, which was the only LNG export project globally to reach FID in 2020.

The Energía Costa Azul project aims to capitalise on relatively cheap gas from Texas and the western United States by liquefying and exporting it as LNG to lucrative Asian markets in the Pacific.

The project’s first phase will be built and operated by Sempra LNG and IEnova, Sempra Energy's subsidiary in Mexico, as a single-train liquefaction facility with nameplate capacity of 3.25 million tonnes per annum (Mtpa).

The project is underpinned by two 20-year sale and purchase agreements with LNG trading house Mitsui and energy major Total for the purchase of approximately 2.5 mtpa Sempra expects first LNG production from the project in late 2024.

Month-on-month export performance continued to improve in January – albeit only slightly – with shipments increasing by 0.66mmt (2 percent) compared to the 2.08mmt (7 percent) in December.

Following the restart of Idku LNG, Egypt’s second LNG plant at Damietta is likely to follow suit via the LNGC Vivit Americas by the end of this week. We reported last year that the plant was likely to restart operations in 1Q 2021.

A way forward for FLNG

The first implementations of FLNG technology were balance sheet financed with concepts capturing all stages of gas production on one vessel. However, this resulted in very costly projects, with cheaper innovations seeking to edge them out as leading concepts. Markets Editor Alexander Wilk reports.