Petronas loaded the first LNG cargo from its second FLNG plant on Monday, in line with the schedule announced after first gas at the beginning of February.

The cargo aboard the Petronas-controlled LNGC Seri Camar is earmarked for PTT’s Map Ta Phut terminal in Thailand. PTT is an important partner in Petronas’ FLNG ambitions as Malaysia’s hydrocarbon sector is undergoing a reshuffle and gradual liberalisation. 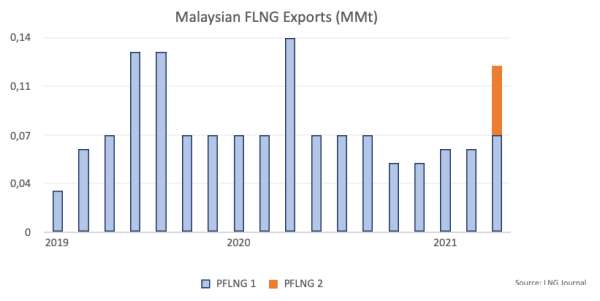 The Seri Camar loaded roughly 0.05mmt, with the cargo scheduled to arrive at PTT’s Map Ta Phut terminal in Thailand by Friday this week.

PTT Exploration and Production (PTTEP) – a subsidiary of Thailand’s energy champion PTT – is a project partner in the development of the Rotan offshore gas field that supplies PFLNG Dua with feedgas.

PFLNG Dua celebrated first gas on 6th February and began liquefaction in mid-February. At the time, Petronas Vice President of LNG Asset Zakaria Kasah said: “This achievement showcases our focused execution and continuous effort in pushing boundaries to deliver innovative and customer-centric solutions to our customers.

Despite operating in a challenging environment which is exacerbated by the COVID-19 pandemic, we managed to commission this megastructure and achieve first LNG production in 7 days upon the first gas in. This is a record achievement, and a great milestone for PETRONAS and the LNG industry.”

PFLNG Dua is capable of reaching gas fields in water depths up to 1,500 metres and has nominal production capacity of 1.5 million tonnes of LNG per year.

Petronas is keen to unlock remote and stranded gas fields that were previously uneconomical to explore and develop. Malaysia has conducted a series of annual bid rounds to boost exploration and launched this year’s licensing round on 1st March.

This drive is taking place in front of a backdrop of larger players such as Murphy Oil and ExxonMobil working to reduce their exposure or exit Malaysia altogether as many mature hydrocarbon assets are becoming less productive.

Following decades of keeping the domestic E&P sector under a tight lid, the Malaysian state is working to lower barriers of entry to the hydrocarbon sector to continue attracting vital foreign direct investment.

Regional players such as PTTEP have thus managed to secure substantial acreage. Smaller E&P independents such as Malaysian firm Hibiscus Petroleum have also made inroads whilst UK-based Coro Energy has concluded a joint study agreement with Petronas.